LONDON --
Organizers of the London Live 8 concert said Sunday that the British rock band Pink Floyd would perform with its classic lineup at the July event for the first time in more than two decades.

The group, which achieved major success with their 1973 album "Dark Side Of The Moon," will join musical acts including Elton John, Madonna, Paul McCartney and Coldplay at the anti-poverty concert in Hyde Park on July 2.

"Like most people I want to do everything I can to persuade the G-8 leaders to make huge commitments to the relief of poverty and increased aid to the third world," Gilmour said.

"It's crazy that America gives such a paltry percentage of its GNP to the starving nations."

Waters, the group's founder, split with the rest of the band after a falling-out in the 1980s.

"Any squabbles Roger and the band have had in the past are so petty in this context, and if re-forming for this concert will help focus attention then it's going to be worthwhile," Gilmour said.
Posted by Jose Zegarra Holder at 7:51 PM 1 comment:

The Mars Volta - What a buzz beforehand, everyone was talking about it, no one seemed to have any plans to miss it. I could not tell where the songs started and ended. Latin Rock explosion. Totally mystifying. Definitely sounded like aliens were coming to explode This Tent in the first notes, they blew out all the power. This is the biggest thing in rock right now, I hope they stay true to the intention, the Volta could be the biggest latin rock band of all time. Not kidding. (listen to "Drunkship of Lanterns" in case you have been living under a rock).
Posted by Jose Zegarra Holder at 7:13 PM No comments: 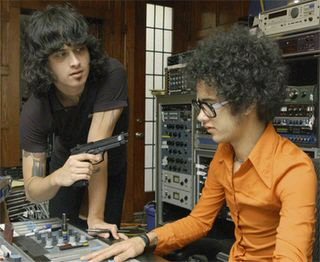 Some folks dance with chaos. There’s always a chance they’re going to slip and bloody their nose but they jump in the ring anyway. Some just can’t resist the electric tongue lash, the slippery fall into dark things and mystery and fearful corridors that the straight life keeps at bay. The Volta are these kind of animals and they stepped lively at a Friday midnight tent performance that drew myriad acolytes into their unique sphere to chase the sunrise.

As others have pointed out, one is either all the way in with Mars Volta or they’re on the outside. Completely. As this performance would prove, they’re an immersion experience. The wild swings from baroque delicacy to screaming abandon aren’t for everybody. But, and this is a key point, if you take the whole ride Volta will transport you cosmic furlongs. They are a simmer not a flash fry, so when they do spit fire it arrives when one least expects it. Taking sticky spoonfuls of heavy metal, avant garde jazz, latinismo and classical construction, they serve up a patchwork buffet that tastes genuinely new.

Knee deep in howling teens, it’s clear we’re witnessing the birth of a new cultural icon in young America. One that’s unfit for radio consumption and unlikely to capitulate to the demands of the market place anytime soon. They seem intent on keeping an arm’s length from the corporate world as they pursue an adventurous agenda that sets them apart from nearly any other mainstream act today.

They want big stages to hold their big stage presence. They strut and preen like men who’ve watched Zep’s Song Remains The Same like the Kennedy assassination footage, learning when to dip back and to the left with a studied grace. They mime rock’s clichés but in a way that mines them for the real power that lies hidden under the gestures. The roar everytime Omar Rodriguez Lopez windmilled a power chord or singer Cedric Bixler Zavala discovered new ceilings to his falsetto the room exploded. Put another way, their antics are pretty bloody effective. As their two hour set evidenced, Mars Volta has a burrowing spirit that goes deep in our shallow times. It’s already brought them quite far, quite fast and the end looks nowhere in sight.