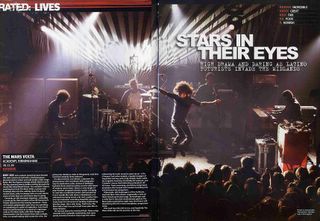 Posted by Jose Zegarra Holder at 5:13 PM No comments:

The antidote to stale music everywhere. Early in 2005, TMV dropped an insane concept album slapping music fans with an indefinable mix of musical styles. Blowing tons of neurons, this one's a no-brainer for one of the top albums of 2005. Catchy, dark, intense, and simply powerful, this is the very definition of rock music....for people who like their rock to be kicking, screaming, and scaring the ignorant masses as opposed to being dead and decaying in the barren ground. Viva la Volta! - Mark

From Mariah to the Mars Volta to M.I.A., 2005 was a fantastic year for music — and that’s just the “M”s! But only the very finest releases made it onto Blender’s alphabet-spanning top 50.

Five minutes into most latter-day prog rock, and the big ideas driving the music seem to shrink, becoming routine platforms for show-offs. Not so with The Mars Volta's mindbendingly intricate second album Frances The Mute. This five-song cycle achieves its grandeur gradually, through detours into totally plausible son montuno rhythms, hiccuping King Crimson syncopations, the majestic melodies of Pink Floyd circa Wish You Were Here, or thrashy dissonant collisions rendered in horrifying slow motion.

Great punk bands take what they want, then turn it into something else. Attacking the hobbit-infested shire of progressive rock, these shape-shifters -- led by ex-At the Drive-In duo Omar Rodriguez-Lopez and Cedric Bixler Zavala -- do battle with the concept album. On the quasi-sequel to 2003's De-Loused in the Comatorium, Volta spin oblique tales inspired by a diary that late band member Jeremy Ward found in the back seat of a repo'd car. But if that MO sounds a bit out there, their space jams still have roots in our doomed stratosphere, and their noodling has a hardcore pulse. Classic rock for right now. C.R.

Perhaps the only rock band to be truly unique (and sonically transgressive) in 2005, Mars Volta delivered Frances The Mute (Universal, 2005), an album that matched and surpassed the art-pomp of its predecessor. Except that here they tried to balance the urge to exhibit their astronomical technical skills with the desire to be actually understood by the audience. The intricate, nonlinear art of the first album is bent to more spectacular ends, with mixed results: instead of a brutally disjointed but viscerally effective stram of consciousness, we get a sequence of complete but incoherent fragments. Each of the five tracks is basically an album in itself, made of several sub-tracks that often collide with their neighbors instead of segueing smoothly from and into them. Theodore's drumming, Rodriguez's guitar, and Bixler's vocals seem to embody all the technical progress of the last two decades, from Red Hot Chili Peppers to Phish, from Korn to System Of A Down, as if progressive-rock (reincarnated in Mars Volta) was attempting to catch up with any relevant style developed after its heyday. The dizzying experience of dissecting Cygnus Vismund Cygnus and the 30-minute Cassandra Gemini is enough to swallow much of the recent history of rock music, like a black hole in waiting. It doesn't mean that everything is essential: one can easily argue that each track could have been trimmed down to make it more effective. It would have also helped focus on the fragments that truly matter, many of which are left in the air without a sensible development and ending.

Prog made something of a major comeback in 2005 and none were more prog-rock than the big haired, smacked-out South American lunatics The Mars Volta. While their erstwhile At the Drive-In brothers continued to plough a similar furrow to the old band, Cedric Bixler-Zavala and Omar Rodriguez-Lopez went all-cosmic on our asses and took off to somewhere completely different; to a planet far, far away from which their scrambled, pretentious brains may never return. PlayLouder said: "It's a weird world we live in when progressive rock can sound this vital, this fresh, this downright exhilarating..."

Combining near-suicidal excess with hairpin-turn discipline, the Mars Volta's second album is the most confounding and compelling hard-rock album of '05: a wildly nonlinear, bilingual tale of abandonment and breakdown, scored with hyperfusion time changes, animal-guitar math and sudden healing pools of norteno folk and salsa piano. The only thing more astonishing than the swing from the concise avant-Zeppelin of "The Widow" to the half-hour lunacy of "Cassandra Gemini" is the idea that this kind of dementia could be played live. The proof: the end-of-year concert release Scabdates.

Progressive Ears - Overall, this is an album that is so ambitious, so pretentious, and madder than a pink zebra who hasn't even seen his medication in weeks let alone taken it, that you can quite easily expect some people to hear just ten minutes of it and straight away dismiss is as interminable nonsense. And yet, the album has so much energy, imagination and ferocity to it, all traits that are lacking in 95% of contemporary prog and mainstream music as a whole. This album represents a step up from De-loused In The Comatorium and if The Mars Volta just showed a little more restraint and realized that sometimes less really is more then they could yet release a progressive rock masterpiece for the 21st Century. Only time will tell.

Seen by many as the future of Prog Rock this TMV magnum opus has certainly helped re-awaken mainstream press interest in our favourite genre. The 30 minute epic Cassandra Gemmini will tell you everything you need to know about TMV and more besides.

Posted by Jose Zegarra Holder at 10:21 PM No comments: